I’ve been part of GO-JEK from the time we did a seemingly insignificant thousand orders a day to over 100,000,000 a month. We did this in 150 relentless weeks. We’re without a shadow of doubt, the only hyper-growth startup at such scale. And from a developing country no less.

There are a million families, not people, but families, that are already dependent on us daily for their livelihood. This is a big responsibility, and we take it seriously.

One in ten Indonesians use our app every month, one in four have it installed.

We’ve had to adapt a lot to get here. A lot of has changed. Monoliths have given way to hundreds of micro services. Hitting the database for number of orders has given way to a sophisticated ‘Business Intelligence’ team. The old mobile app has given way to a complicated design language system and a slick new interface.

A lot of things have changed except the values, the dream, the pitch, and above all, the philosophy that stitches it all together, people.

Build a company, or a community

We just found our first GO-FOOD millionaire. GO-FOOD is our food delivery product. Just to give you an idea of scale, we do more orders than all food tech startups in India, COMBINED. 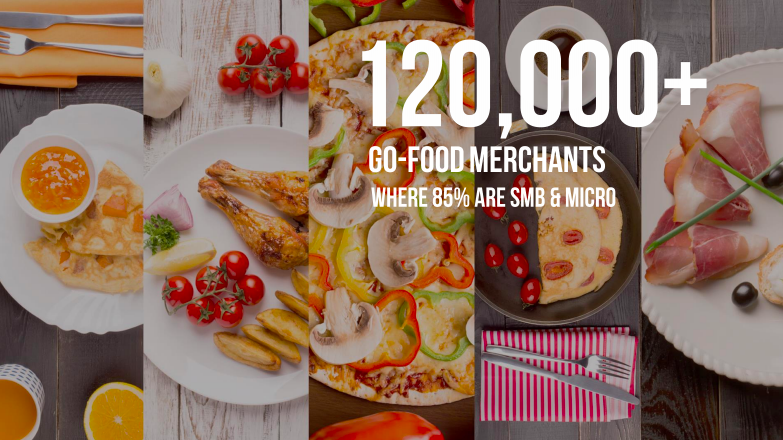 GO-FOOD helped a lady selling “Pisang Goreng” on the streets of Jakarta start delivering in quantities she didn’t know were needed. When she started with us, she used to make $300 a month, now she does over $100,000 dollars a month and provides employment for over 30 people from the six stores she runs.

Then we have Arisan Mapan. With Mapan, we are fulfilling dreams for families in the tiniest of villages in Indonesia by helping their dreams of buying utensils they never had, and sending kids to schools and universities. We’ve created millions of jobs addressing 15% of Indonesia’s unemployment.

We are in the business of fulfilling dreams.

We have micro lending options with a unique mixture of tech and ops, covering a country spreading across more than 17,508 islands, despite a non-existent credit rating system. I can go on with these stories. Our reach and efforts are nothing short of staggering.

Hire the best, leave them alone

Our transport product team forms the core of all our services. We successfully compete against companies with significantly bigger war chests by focusing on automation and having a high barrier of entry. Getting into GO-JEK is really tough and we really need more engineers to expand, but hiring recklessly would also hamper our quality. Our competitors are 400-people strong for tasks where we have only 20. That’s because of our philosophy of building a ‘lean engineering mindset’.

None of this would have been possible without a team which kicks ass. We’re already on the verge of sending one biggie packing, and we’re just getting started. 😉

One of the reasons we’re able to move so fast, is because the feedback loop for the product is continuous. You need to just show up at the airport with a GO-JEK T-shirt for people to come up and speak to you. Our customers are equally passionate. Some of this dialogue is incredible. It makes you understand the gravity of who you are.

My helpers’ son is a GO-JEK driver. He tells me about bugs and how to improve our UX. My real estate agent spoke in length about what would be the best way to be picked up by a car when you leave a mall. One of my GO-JEK drivers sang a 15-year old song from a Shah Rukh Khan movie. He tells me he loves India. And I tell him I can’t be more grateful for him and Indonesia.

So, six months ago, I decided to call Indonesia home and moved here with my wife and two year old.

Drastic? Not at all. GO-JEK is a verb in Indonesia. You only have to be here to understand our reach and the magic a small nimble company has managed to create.

We’re only as good as our people

We are already legendary in Indonesia and now have our eyes on the world. The focus for 2018 is fairly simple… to beat the crap out of our competition.

We’ve had our fair share of colossal ups and devastating lows. There are days when you decide not to show up home to meet your two-year old. But it’s significantly more fulfilling than anything you have done in your previous life. It’s the story you will tell your grand kids one day when they ask you what you did.

If this all sounds way too dreamy and preachy, I have a fairly simple proposition for you:

If you are driven to make an impact, pack your bags, find the next flight to Jakarta and come work with us.

The next revolution is coming and it is going to be bigger, harder and fiercer than ever before, and it’s going to be here. We are expanding, we’re building startups within a startup. We’re creating an ecosystem for a “Super App”. And above all, we have a culture of building micro entrepreneurs. We don’t have hierarchy, we don’t have “bosses” or “managers”. And I can guarantee you, GO-JEK is a dream place to work in.